How to replace and tension the belt in the washing machine

How to replace and tension the belt in the washing machine

Often during the operation of washing machines there are various malfunctions of such household appliances, which can be eliminated both independently and by contacting specialized specialists. In the latter case, the costs of homeowners are constantly increasing, since the cost of services of specialized craftsmen will be extremely high. Knowing how to tighten the belt of the washing machine, you can perform such repairs yourself, significantly reducing your costs. 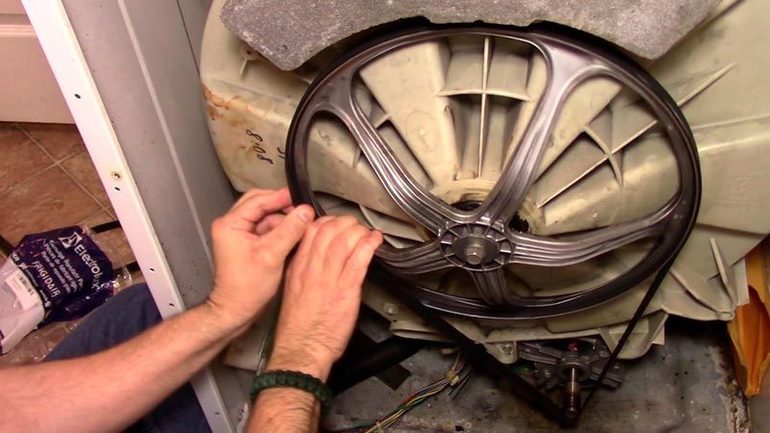 Design features and signs of damage

A belt in washing machines connects the drum pulley and the motor used. Its main purpose is the transmission of torque, respectively, the drive due to excessive load often fails. Many manufacturers indicate the life of the entire structure is about 10 years. However, in most cases, after 3-5 years of active use of the washing machine, the first symptoms of a stretched drive are noted.

Many modern washing machines have built-in automation, respectively, in the presence of such malfunctions, the corresponding error codes are displayed on the built-in display. Visually, such breakdowns can also be determined by characteristic signs, including increased vibration, lack of rotation and the appearance of extraneous sounds.

The main symptoms of a drum drive malfunction: 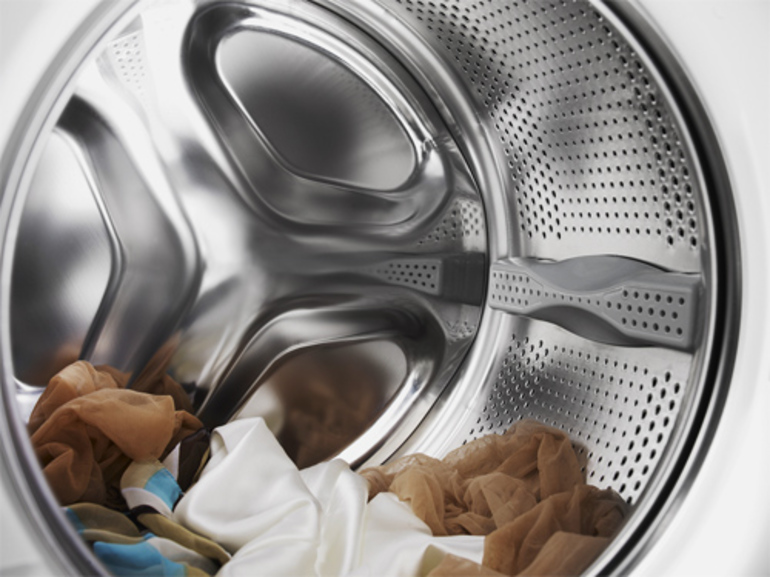 In the presence of all such symptoms of malfunctions, you should immediately turn off the equipment, disassemble it, put the belt on the washing machine or contact a specialized service.

If the homeowner still tries to wash the laundry in case of problems with the rotation of the drum and breakage of the drive, this can lead to serious malfunctions, up to the need to completely replace the control automatics and electric motor.

The reasons for stretching and breaking the drive can be many. This is both the physical fatigue of the belt, which, due to significant loads, becomes unusable, and the incorrect operation of the washing machine. In each case, the repair will be different. If the problem is only in the belt that has slipped off, then it’s quite possible to put in a new drive or tighten it, restoring the equipment yourself. Whereas if there is a break with engine failure, then in such a case, you need to contact professionals.

Belt problems can occur in the following cases: 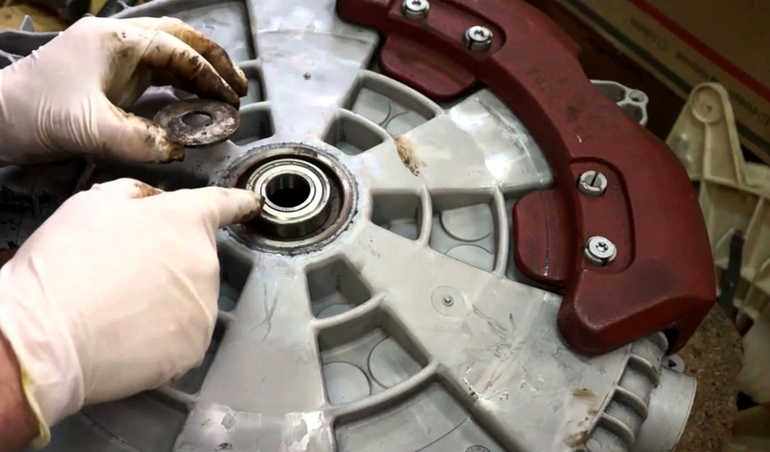 At the first sign of a malfunction, the homeowner should carry out diagnostics and repair the equipment.

A break in the drive can lead to the failure of automation, various indoor units and expensive models. In this case, the electric motor, which is one of the most expensive components, often suffers. Put the belt on the drum of the washing machine, so repairs can be done with your own hands.

Most Indesit washing machine drum drive malfunctions involve replacing or tightening the belt. Torn or visually deformed parts must be replaced. They also recommend purchasing new components if slippage and increased belt wear are noted. You can identify such problems and replace failed parts after opening the machine, after which they check how the drum is spinning and if it is spinning due to a worn drive.

If the diagnostics of the equipment revealed serious problems with the drive, then it will be necessary to choose the right replacement parts and install them in accordance with the technology of such work. To do this, remove the old part and study its marking. The belt is selected according to the first digit and four letters of the index in the drive designation.

Belt marking is as follows: 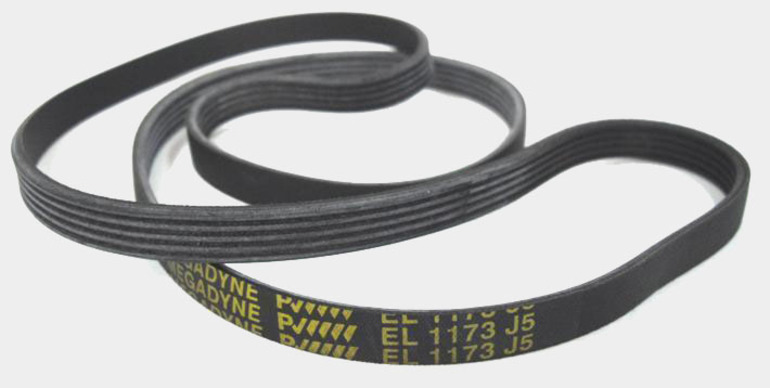 You can find all the necessary information on the specification of belts for specific models in the instructions for household appliances.

Wedge-shaped and semi-wedge-shaped vane drives are on sale, which differ in their design and shape. V-belts are designed for older models of equipment equipped with induction motors. They are characterized by maximum strength, rigidity and elasticity.

Directly replacing the drum belt is not particularly difficult, therefore, all homeowners will be able to cope with such work, saving on the cost of contacting specialized workshops. Depending on the specific modification and the manufacturer of the washing machine, this work may vary slightly, however, in most cases, repairs are carried out according to the standard procedure. The easiest way is to put a belt on a washing machine of the brand Indesit, Ariston, LJi, Samsung and Bosch.

It remains only after the complete assembly and installation of the equipment to conduct its test run, for which the express wash mode is activated.

Such work on replacing the belt is not particularly difficult, you only need to act as carefully as possible, observing all the technology and choosing the right replacement parts correctly.

If the homeowner wants to extend the life of all equipment and the drum drive, he needs to monitor the total weight of the loaded laundry. In order to save money, housewives often load the basket to the maximum, which leads to a significant increase in the load on all moving elements, including a belt with rollers. 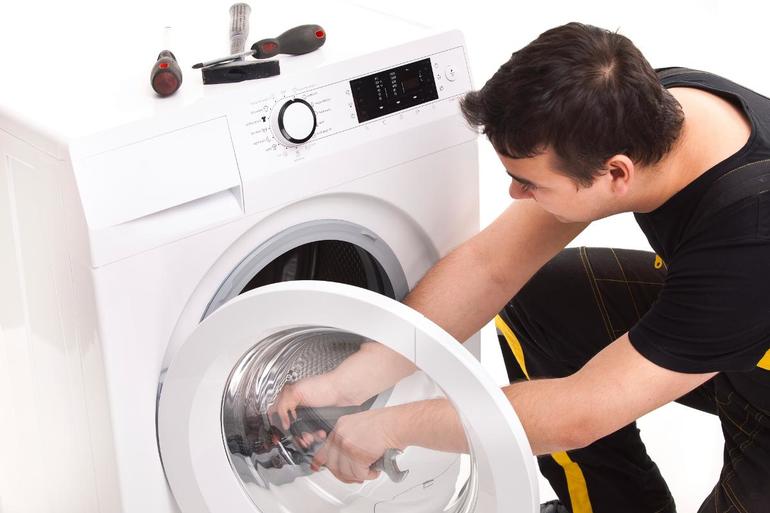 You will also need to monitor the technical condition of the washing machine, and in case of any malfunctions, it should be diagnosed and repaired. Often, homeowners neglect such recommendations of specialists, pull them to the last with repairing equipment, as a result of such simple breakdowns, which would not be difficult to eliminate, ultimately lead to the need to replace an expensive engine and automation.

Also, in order to prevent serious malfunctions of washing machines, they should not be loaded and at the same time be used as often as possible. With prolonged downtime, calcium deposits appear inside the drum and on all moving elements, the drive loses its elasticity, which subsequently leads to its rapid rupture and the need to repair equipment.